The sun rises on a gorgeous morning in Reid Harbor.

The morning at Reid Harbor was wonderful…calm and sunny…even though it was a little cool with temps in the 50s. We have to be back in Anacortes in 4 days, so we pondered where to go. We thought about going to Sucia (http://en.wikipedia.org/wiki/Sucia_Island), but had concerns about the anchorage being crowded since this is the Fourth of July week, and we were looking for a quiet place where we could continue our relaxing.

Rosie looks out at today’s sunny morning in Reid Harbor.

Nothing in the San Juans seemed right, so we finally decided to head into Canada, and go to Montague Harbour. Montague is one of our favorite anchorages in the Gulf Islands, particularly because it offers a very large anchoring area as well as some enjoyable hiking and a small store at the Montague Harbour Marina (http://www.montagueharbour.com). With our Nexus passes, we can clear Canadian Customs by cell phone in Boundary Pass and arrange to stop in Montague for a customs inspection, if they want to board us. They did not.

We passed the Turn Point Lighthouse as we navigated from Haro Strait to Boundary Pass.

We hadn’t planned on going to Canada, so needed to check what liquor and food we had on board. Only had some beer and a few half full bottles of booze, so we were within the limit for alcohol. However, we did have potatoes on board. Potatoes are not allowed to be brought into Canada. So, when we called Customs for our clearance, we disclosed the potatoes. The customs agent suggested we peel the potatoes and put them in the freezer…so that’s what we did! Used them later to make potato salad.

Two of the BC ferries we encountered in Swanson Channel…one headed for Active Pass and one that just came through the pass.

This week had spring tides, and we encountered strong currents in Haro Strait and Swanson Channel…lots of whirlpools and some tide races. Even though there wasn’t a lot of wind, we bounced around quite a bit. We also encountered 5 or 6 ferries as we crossed Swanson Channel near Active Pass, and their wakes added to the bouncing.

The trip from Reid Harbor to Montague took about 3 hours. We motored slowly so that we didn’t get to Montague too far ahead of the time we told Customs we would arrive. The knot meter is still not working, and AIS is also not working. Later, we found that the data rate between AIS and Nobeltec was incorrectly set, which explains the AIS problem, but we still don’t have a clue about what’s wrong with the knot meter.

There weren’t as many boats anchored in Montague Harbour as we expected. 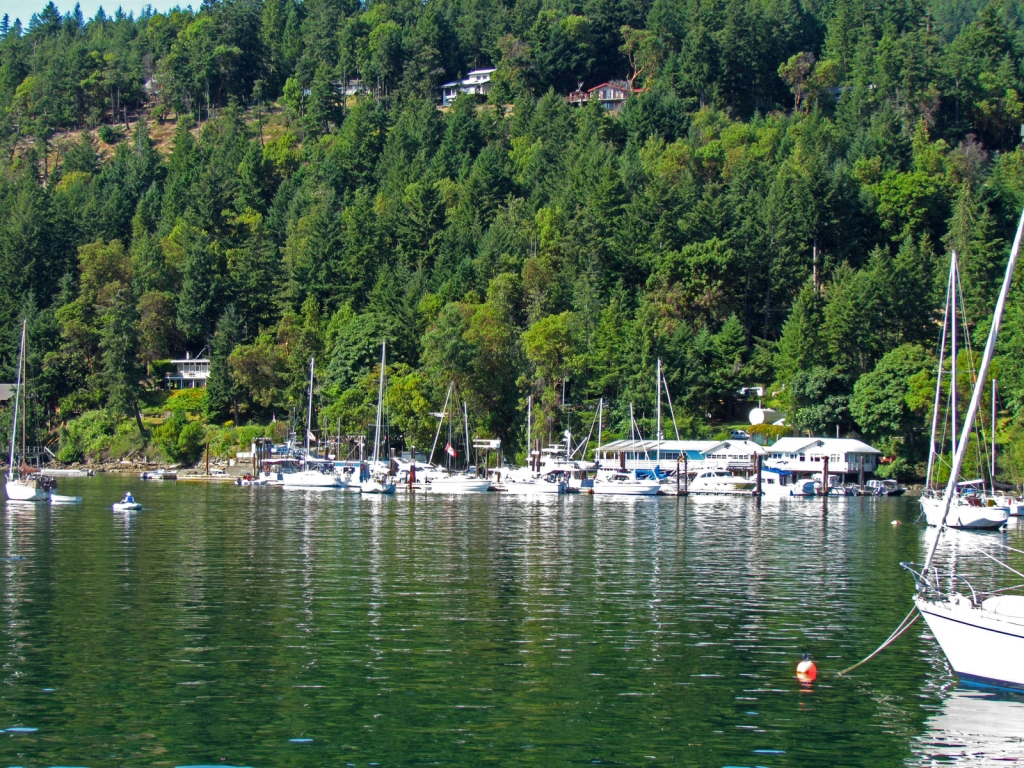 Montague Harbour Marina has a small store and a modest restaurant. Moorage and fuel is available.

There were not as many boats in Montague as we expected, and it was sunny, warm, and fairly calm with a gentle breeze in the anchorage. A great afternoon to sit on the flybridge and catch up on more reading! Due to the high tides this week, we noticed a lot of floating debris that came through the anchorage from time to time. Even some big logs. Good thing the tide doesn’t push that stuff very fast… 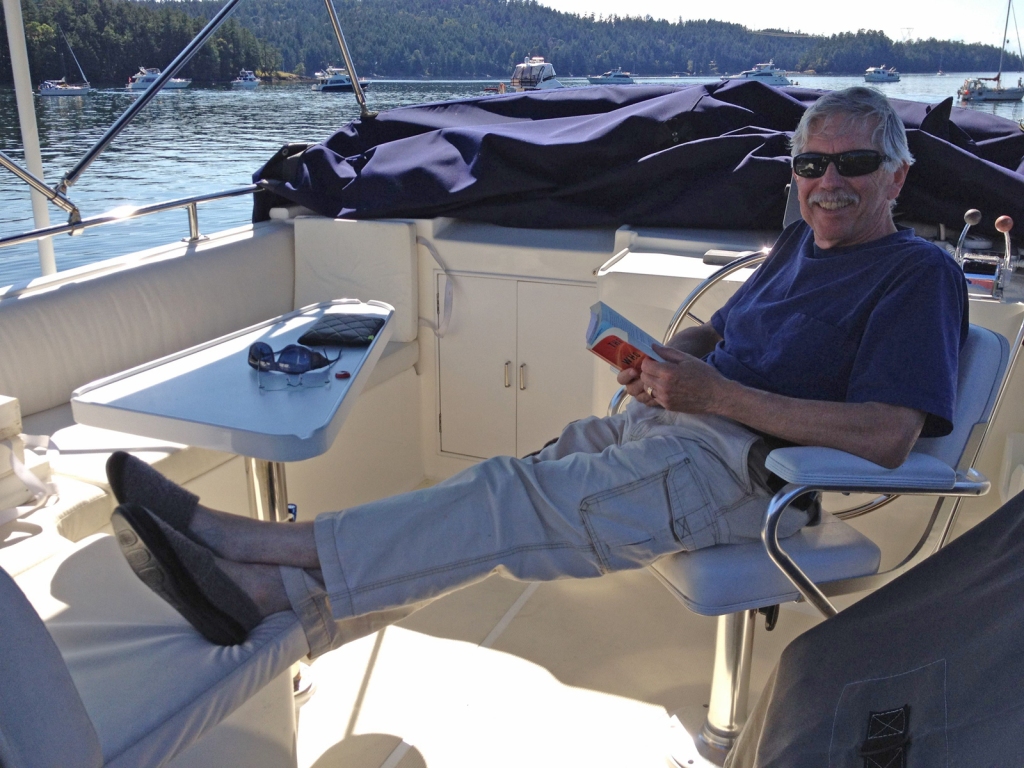 Jim enjoys some relaxing time for reading on the flybridge while we were anchored in Montague Harbour.

The kitties enjoyed some relaxing time too. Rosie curled up on the left and Mickey REALLY relaxing on the right.