After we entered the San Juan Islands, we were treated to this great view of Mt. Baker behind Orcas Island. Obstruction Pass is on the right.

We’re back on the water for part 2 of our 2012 cruising! We’re having a very nice sunny and dry stretch of weather…but a little on the cool side. There’s definitely a nip of fall in the air.

Prevost Harbor is located on the north side of Stuart Island.

Our destination for today is Prevost Harbor, on Stuart Island. This is a great stop when heading on to the nearby Gulf Islands in British Columbia. Prevost Harbor is a secure anchorage with good holding, and the entrance to the harbor is from Boundary Pass, so it’s just a straight shot to head over into Canada. There is a dock maintained by the Stuart Island Marine Park, where boats and dinghies can moor/tie-up and have access to the state park campground and trails. There is also access to the state park from Reid Harbor, just on the other side of Stuart Island.

From Guemes Channel, we entered Rosario Strait at slack current, which helped us have a comfortable crossing. In the distance, one of the Washington State ferries on its way from Anacortes to Friday Harbor is about to enter Thatcher Pass…you might have to click to enlarge the photo to really see the ferry!

We got away from the dock in Anacortes at 0915 and enjoyed the last of the ebb tide that carried us out Guemes Channel. We entered Rosario Strait at slack current, which made for a very comfortable crossing to Thatcher Pass. 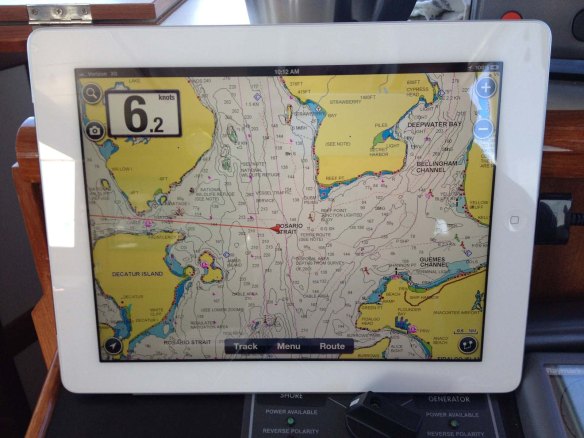 The Navionics app on the iPad is a fantastic tool for navigation. This is the display as we were in the middle of Rosario Strait and headed toward Thatcher Pass. The red arrowhead is our location and the red line projecting from that shows our course toward Thatcher Pass.

As we entered the San Juan Islands, the current was with us, which resulted in a rather bumpy ride through the chop that developed because the brisk 15+ knot NW wind was blowing against the current. It was windy throughout the islands, but we found less wind as we entered San Juan Channel. However, we did have some lumps due to the current in Haro Strait meeting up with the current in Boundary Pass.

Prevost Harbor calmed down toward the end of the afternoon. This is the view of the head of the harbor looking aft over our stern.

We arrived in Prevost Harbor at 1345. It was breezy in the harbor, but not uncomfortable. It was easy to find a place to anchor as there was only a handful of boats anchored and only a few at the dock and on mooring buoys. The dock did fill up by nightfall, however, only two of the mooring buoys were used, leaving at least four empty buoys. The state-provided tie-up mooring was not used at all. Fall cruising is so much quieter than in the summer!

We saw a few boats at the dock and a few on mooring buoys. The dock is in the center of this picture, and if you look carefully you can see several white dots that are empty mooring buoys.

We spent a quiet afternoon of reading and relaxing, then barbecued pork chops and made a Waldorf salad for dinner. The sun is setting much earlier now…the sunset was at 1930. 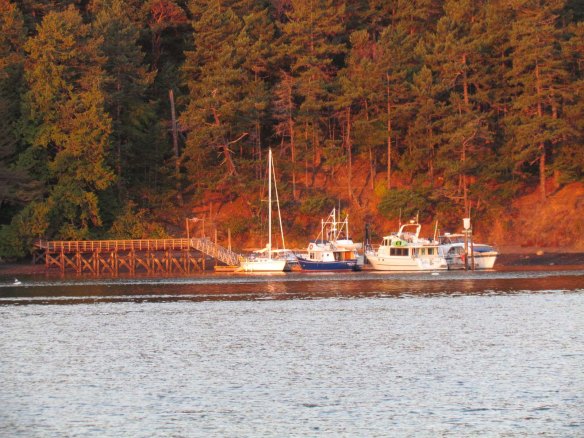 In the morning, the boats at the dock were bathed in the early morning sunlight.