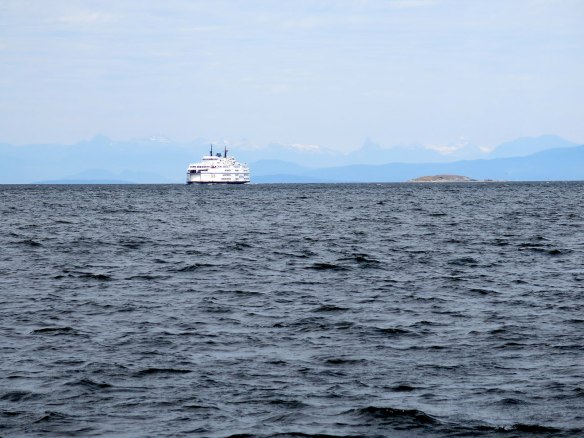 As we left Nanaimo Harbour and came out from behind Newcastle Island, we rolled for a while in a 1-2 foot chop coming in from Georgia Strait. We could see this B. C. ferry making its way to Nanaimo, with the snow-capped mountains of the mainland in the background.

After our 11-hour trip from Desolation Sound to Nanaimo, we decided to stay a second day at Nanaimo. It was a good time to take care of some maintenance around the boat and to rest. We took a long walk along the Nanaimo Harbour Walkway in the morning before it got too hot. The heat wave was continuing, and it was in the high 80s or low 90s again today. Not much wind in Port of Nanaimo either, and it didn’t get below 60 overnight. The boat was hot.

The Dodd Narrows slack on Monday was at 1221, and since we had to leave mid-day, we decided to select a relatively close destination. We picked Telegraph Harbour Marina, on Gulf Island’s Thetis Island. It’s about a 3-hour trip from Nanaimo, and would give us a power hook-up to help with our battery situation.

We pulled out from the Port of Nanaimo at 1130 and encountered rather choppy water for the stretch from Nanaimo Harbour to Dodd Narrows. There was 10-15 knots of northwest wind coming off Georgia Strait, creating 1-2 foot chop on our beam. We rolled for a while, but the water settled down as we got in behind Gabriola Island and got some protection from the wind. 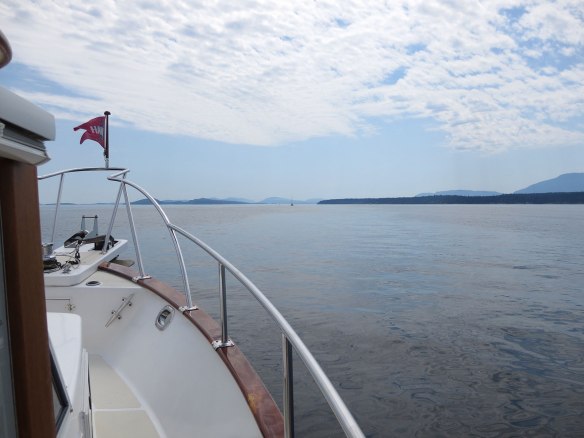 After we navigated through Dodd Narrows, Stuart Channel was calm the entire way to Telegraph Harbour.

We got through Dodd Narrows a little after slack. The current was turning with us, giving us a nice push through the narrows. The wind died off after we entered Stuart Channel, and we found calm conditions all the way to Telegraph Harbour. We also saw an abundance of floating logs and wood pieces. The debris stretched almost all the way across the channel, and continued for about a mile. We had to go slowly to pick our way through! 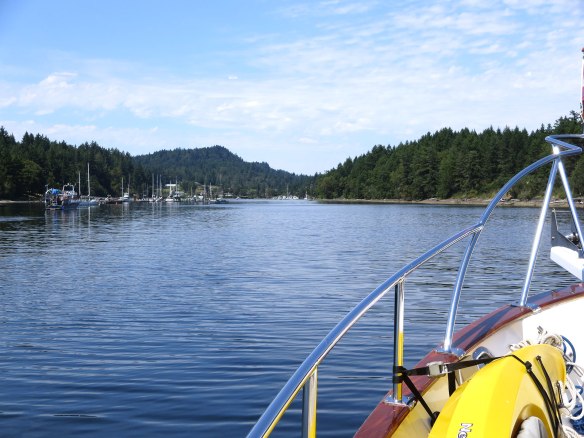 Telegraph Harbour Marina is at the end of a narrow passage. Thetis Island Marina is also located along this passage, and is on the left in this photo. We’ve been to both marinas, and prefer Telegraph.

It was sunny and hot again, but we were much cooler on the water with all our ports and doors open. We were assigned a tie-up on I Dock, and they asked us to pull forward next to a Pacific Trawler. The boat warmed up quickly again as soon as we stopped. It’s unusual to find such hot weather here this early in the summer, and it was hard to adjust, especially since it came on so quickly. 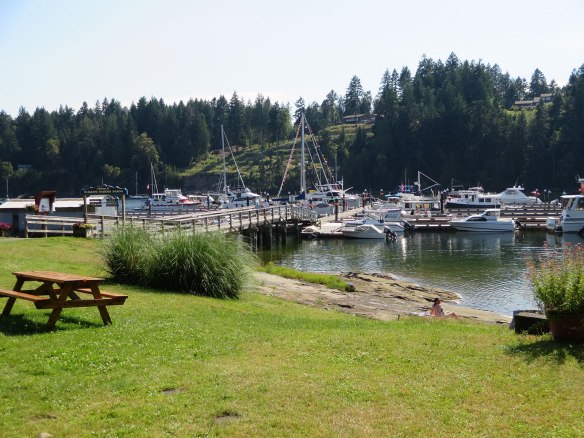 We walked up to check on the marina store and office. It’s been several years since the last time we were here. There are new owners, and they have changed the name of the store to Telegraph Harbour Bistro. They added some café tables inside as well as outside on the deck, and have less space for books, clothes, and other souvenir items. They serve breakfast, lunch, and dinner…and still have great ice cream cones.

The Telegraph Harbour Bistro and store is reached by a short walk up from the docks.

A closer look at the Telegraph Harbour Bistro.

We opened all our ports and doors, and put towels or canvas over the hatches, but it was still hot. And got hotter as the evening progressed. At this time of year, the sun goes down at the head of the harbor, and shined on the stern and aft cabin of our boat until well after 2100.

We barbecued the sockeye salmon we got from Thrifty Foods in Nanaimo and corn on the cob. Didn’t want to add any heat from the stove to the inside of the cabin! We made a point of eating early so that we could go up for ice cream cones before the store closed at 2000. We took a short walk after our ice cream, but it was still too hot to walk very far. We’re hoping for some cooler, seasonal weather tomorrow! 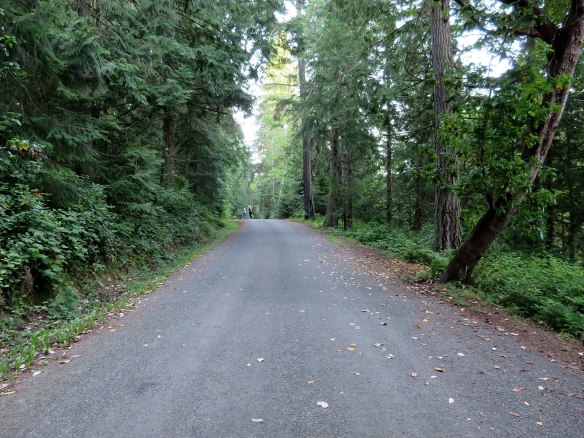 After our ice cream cones, we walked along a shady road, where it was cooler. 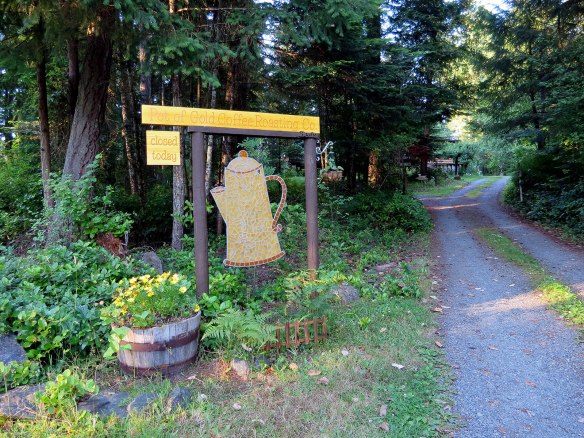 Along a side road on our walk, we came to this cute sign for a coffee roasting company and café. Too bad they were closed.