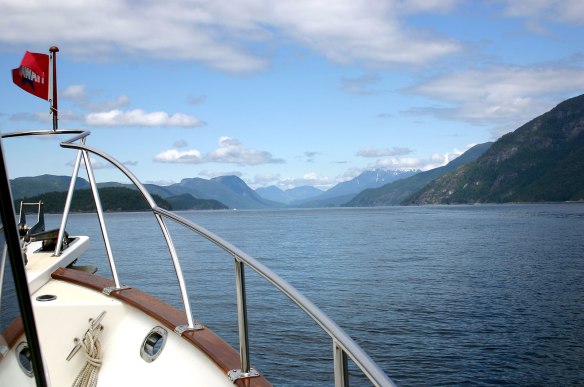 In 2007, we had sunny skies and calm water as we headed from Desolation Sound toward Yuculta Rapids. This view always inspires us, as the Rapids mark the northern boundary of Desolation Sound and are the entry to North of Desolation Sound where the cruising becomes more remote—with magnificent scenery, more wildlife, colder and harsher weather, fewer services, and fewer cruising boats. It always represents adventure.

In June, we shot another short video during our morning cruise from Squirrel Cove, Cortes Island, to Dent Island Lodge. It was such a gorgeous morning and I was trying out a new camera, a Canon PowerShot N. It’s a cute little point-and-shoot with excellent optics and a generous zoom, and its small size makes it easy to have on hand for quick photos. Also, it is WiFi enabled, so it is easy to transfer photos from the camera to my iPhone so that I can email photos if I want. It uses a micro SD memory card, and it is easy to move photos from the camera to my computer from the SD card. I took many of the photos on our June-July cruise with the “N” to see how it works and also because I liked the results.

This video was filmed as we were leaving Desolation Sound in Lewis Channel, headed for Yuculta and Gillard Rapids. After the cloudy entry to Desolation Sound on the previous day, today’s weather was perfect—sunny and light wind.

This video was taken looking east toward mainland B.C. It starts looking south in Lewis Channel, with Cortes Island on the right and West Redonda Island on the left. As it pans forward, Raza Island appears in the foreground on the right, and then Raza passage is visible between Raza Island and the B. C. mainland. The video ends as we approach Yuculta Rapids with the entrance to Butte Inlet on the right, then Stuart Island ahead, and finally Sonora Island on the far left. Here is a screen shot from my iPad of the area chart covered by the video:

This is a screen shot from my iPad that shows the area covered by the video.

As I said, this view always inspires us, and to prove that, I found similar photos from previous cruises, capturing the same view!

Here’s another photo of the area as we approached Yuculta Rapids in 2008 with more clouds in the sky.

It was calm in 2009 when we traveled again from Desolation Sound to Yuculta Rapids. Can you tell that we enjoy this view?