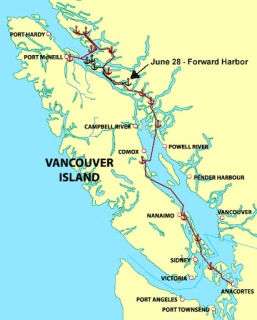 It was calm and lightly raining when we got up this morning in Potts Lagoon. We left at 0700 to catch the slack in Chatham Channel.  We headed down Clio Channel, watching commercial shrimpers and crabbers setting their pots for the day. The rain increased and fog developed as we passed Lagoon Cove Marina. We had an easy transit of Chatham Channel even though the visibility was reduced, and the rain stopped when we entered Havannah Channel. It was still calm…so we decided to continue on to get the Johnstone Strait passage behind us.

We noticed fog on the surface of Johnstone Strait as we looked out from Havannah Channel, and the foggy and drizzly conditions worsened as we entered the strait. We navigated by radar for most of the passage, with visibility of 2 miles or less. We had to watch carefully as there were lots of floating logs in the strait.
We turned in to Sunderland Channel and found a layer of ground fog on the water ahead. We watched a mega yacht emerge from the fog…a Westport 161 called EWIVA, with a helicopter on the boat deck. For a while, all we could see was their bridge deck, then the enormous boat appeared to our starboard. It left a rather nasty wake.
There were no other boats in Forward Harbor when we anchored, still in the rain and fog. Our trip today was almost 6 hours and we were glad to have a quiet and secure place to stop.
June 29 – Shoal Bay Marina
Forward Harbor to Shoal Bay Marina, 19.03 nautical miles
Total this trip to date: 433.86 NM 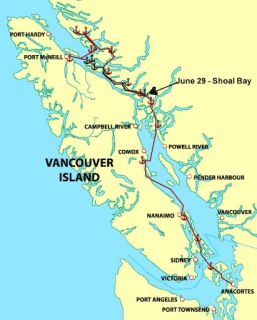 Calm, but still raining when we got up in Forward Harbor. At 1008, the barometer is lower than we’ve ever seen this time of year in this area. Fortunately there aren’t any high pressure systems around, so it isn’t too stormy. But it certainly is gloomy. Hard to realize that it is almost July. Predicted winds for today in Johnstone Strait are northwest 15-20, increasing to 20-30 this evening. We plan to get somewhere where we can be stopped before it gets too bad.

We hoisted the anchor at 0730 to catch the slack current in Whirlpool Rapids and Green Point Rapids. The rain intensified for a while, but finally quit as we exited Green Point Rapids and was replaced by low-lying clouds. There was space at the dock at Shoal Bay Marina as we motored by, so we decided to stop and enjoy Mark’s hospitality again.
Bob and Marilynn Hale, who have owned and published the Waggoner Cruising Guide for many years, were visiting Shoal Bay in their Tolly 37, Surprise. Bob helped us with lines as we arrived at the dock, and it was good to visit with them for a while before they continued on their way north for a planned lunch at Cordero Channel Resort and then on to Blind Channel Resort. Bob sold the Waggoner earlier this year, but said he is still doing some research for the publication and has plans to go to Ocean Falls and Rivers Inlet this season, with a turnaround at Shearwater. We told him about the unseasonably cool and wet weather we had in the Broughtons, and he said the weather has been good on their trip north. Maybe we’ll find some better weather once we get to Desolation Sound…