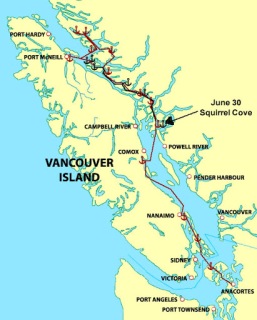 It rained again today.  For the fifth day in a row! So we traveled with windshield wipers and radar again. There are strong winds in the forecast tomorrow for Georgia Strait…SE 15-20…and since we don’t want to be anywhere near Georgia Strait in a southeasterly, we plan to spend two days in Squirrel Cove.

We left Shoal Bay at 0900 to catch the 1015 slack at Dent Rapids. We still encountered a fair amount of whirlpools, but got through all three rapids without incident. We motored south through Lewis Channel in a SE wind, probably 10 knots. It was a gloomy but easy trip today.
There are more boats in Squirrel Cove tonight than we saw when we were here three weeks ago. But not as many as we usually see in here around the first of July. We’ve noticed less boats cruising this year…possibly due to the poor weather conditions and the economy. One marina owner we talked to said they are noticing fewer boats in the shoulder months (i.e. April/May and September/October) than in prior years. Hard to say why.
We’re planning crab enchiladas tonight as we sit in the light rain. But actually there are a few sun breaks, and temps are in the mid-60s, so perhaps the weather is turning to the better…
July 1 – Squirrel Cove
Still raining!!! It’s rained hard every day for the past six days! We have had occasional dry periods, but it’s been mostly wet. Plus, there are strong southeasterly winds 15-20 forecast for Georgia Strait today and tomorrow, and the last place we want to be is heading south in Georgia Strait in a southeasterly. We’ve been beaten up too many times in the past and hopefully we know better now. So, we are still in Squirrel Cove, and will stay here until we get more favorable traveling conditions.
We got some things cleaned up and organized around the boat this morning, and then decided we needed a break. So, even though it was still raining and windy, we put on our foul weather gear, launched the dinghy and motored over to the Squirrel Cove store…slowly in the SE swells. The store is located about 2 miles outside the anchorage, so we have to travel through the anchorage and out into the outer harbor (unprotected) to get to the store. In addition, it was low tide and the rather old ramp at the Squirrel Cove dock was extremely steep and slippery in the rain. We had to climb very carefully!
The store hasn’t changed much over the years. Because it serves the residents of Cortes Island, it’s fairly well stocked. Plus they have a giant walk-in cooler where they put dairy and produce, including a lot of organic products. The store is for sale, so we don’t know what the future will bring.
It was a good night for pasta and meatballs. Thankfully, the rain stopped and the winds turned calm about 1800, and we even had a few sunbreaks during dinner.
July 2 – Squirrel Cove to Pender Harbour
Squirrel Cove to Pender Harbour, 47.74 nautical miles
Total this trip to date: 512.61 NM 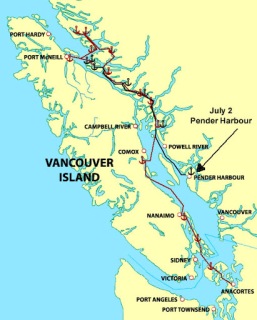 We got up this morning and found the Georgia Strait forecast was 0-10 variable winds shifting to 5-10 NW, and it was calm in our Squirrel Cove anchorage! Looked like a perfect day for going to Pender Harbour.
We hoisted the anchor at 0645 and made our way out of the anchorage, through Thulin Pass, then entered Malaspina Strait. We checked the observation for Grief Point and to our dismay found it was blowing out of the southeast! At 1030, the forecast was changed to southeast winds of 5-15 with wind warnings posted. Ugh. We really didn’t want to have to beat into SE wind. But, we pressed on, and after we rounded Grief Point, the wind picked up and we began to feel some of the southeast swells coming our way.
The swells were bumpy at first, as they were on our starboard beam. The wind picked up a little and the current changed about the time we rounded Cape Cockburn. It’s about 6 miles from Cape Cockburn to the entrance to Pender Harbour, and for the whole way, we were in a washing machine with 1-2 foot swells entering Malaspina Strait from Georgia Strait, then bouncing off the land…so we got it from both directions.  We were very glad an hour later, when we finally made it inside the Pender Harbour entrance where the water was smoother. Rosie and Mickey slept through all this. They are great travelers!
We anchored in Garden Bay, which was very busy because this is Saturday night. Lots of traffic in and out of the marinas, and many boats anchored. The rain started again after dinner, marking seven strait days of rain…
We hope to be able to cross Georgia Strait and make it to Nanaimo tomorrow morning, but the forecast isn’t very promising. We will leave when the conditions are right.