Heading west in Guemes Channel, we caught the outbound current. 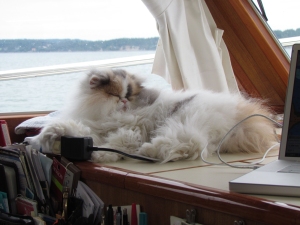 Rosie curled up on the dashboard…she frequently sleeps while we’re underway.

Mickey likes to crawl under our foot stool while we’re underway…a nice secure place for him.

Looking into West Sound from our anchorage behind Double Island, where we stopped for a couple of hours to wait for the Speiden Channel current to change. 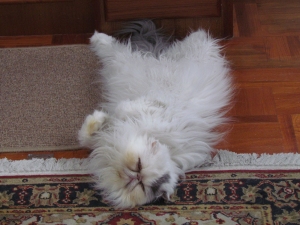 After we got settled at Double Island, Mickey came out from under the stool and showed us one of his best relaxation poses. 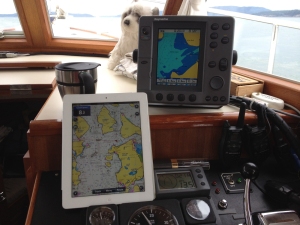 The navigation display on the left is on the iPad using the Navionics app “Marine & Lakes U.S. and Canada,” and on the right as it looks on our Raymarine Chart Plotter. 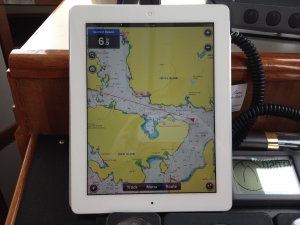 A closer look at the iPad navigation display. Notice the red line that continuously updates while we are underway to show where we are headed. What a great tool! 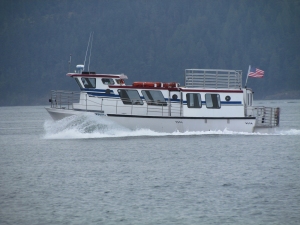 We passed this whale watching boat as we crossed San Juan Channel on our way to Reid Harbor.

As we approached Reid Harbor, we spotted this container ship in Haro Strait, headed for Boundary Pass.

Approaching the entrance to Reid Harbor on Stuart Island, one of our favorite anchorages in the San Juans. 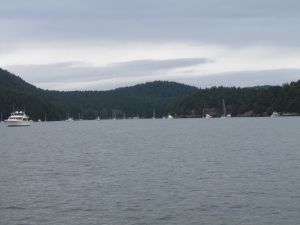 In Reid Harbor, Stuart Island, looking toward the head of the anchorage.

First, a note. We are now back in Anacortes after a one-week cruise from July 2nd to the 8th…but we did not have access to the Internet while we were out, so publishing the posts from our cruise has been delayed. This is the first post from our cruise…more to come soon!

The weather conditions in Anacortes looked good this morning…grey and overcast, but no strong wind and no rain. This was a good morning for us to head out for our first cruise of 2012.

We caught the outbound current in Guemes Channel, and crossed Rosario Strait near the slack. We found lots of boat traffic in Harney Channel this morning, including several ferries. One of the ferries came up behind us as we motored west in the narrowing channel by Shaw Island…we got caught between the oncoming ferry and a large power boat with an enormous wake next to us paralleling our course, so ended up turning toward the beach and slowing almost to a stop, then going in a circle so that we could cross behind all of them. Harney Channel can get really crowded in July and August!

This was our first opportunity to use the Navionics iPad app “Marine & Lakes U.S. and Canada” for navigation. What a neat tool! It has an outstanding display, fast seamless operation, and runs from the iPad’s GPS without the need of a cell connection. The GPS does use a lot of battery, so we discovered it was best to have it hooked up to a power source. We set up the iPad alongside our 10-year-old Raymarine chart plotter and found there was no comparison…the iPad was much better! In addition to following our course, the app also provides a great tool for looking up the tide and current information for any given location.

First time out every year we get to see if things work. Most things were okay, except… The AIS wasn’t working, but that turned out to be a loose wire. And the knot meter didn’t work, and we thought that might be due to something being stuck in the paddle wheel…but no matter how much maneuvering we did, the knot meter still didn’t work. We’ll need to do more investigating to find the problem.

We turned into West Sound and found the anchorage behind Double Island empty so decided to anchor there for a few hours to wait for the current in Speiden Channel to change. We were heading on to Reid Harbor, and wanted to avoid the strong adverse current along Speiden Island. Waiting until later in the day would give the current time to moderate and reverse.

We left Double Island around 1500 and found much less boat traffic than we experienced this morning. And more favorable current! However, the clouds thickened and we had light rain most of the way. Even though we waited for more favorable current in Speiden Channel, we still encountered a strong tide race with lots of whirlpools near Limestone Point.

We found lots of boats in Reid Harbor, but there was still plenty of room to anchor. It turned into a cold, rainy night. But the heavier rain held off until later in the night, so we were able to barbecue salmon for dinner, along with steamed green beans. Felt nice to be out on the anchor again.