When I was out in the kayak paddling around the Prideaux Haven anchorage, I saw this sailboat which was anchored with the best views of the nearby mountains. This is one of the prettiest anchorages we know. It’s even gorgeous with the heavy cloud cover.

We ended up staying two more days in Prideaux Haven, one of the premier anchorages in Desolation Sound Marine Provincial Park. The unsettled weather persisted, including strong southeast winds in the straits. However, it was calm in the anchorage and was a good place to stay until we had better traveling weather. Our day started out cloudy and dry, but the rain set in by mid-morning and turned into a downpour for the rest of the day…and night…and next day…and night… You get the picture. 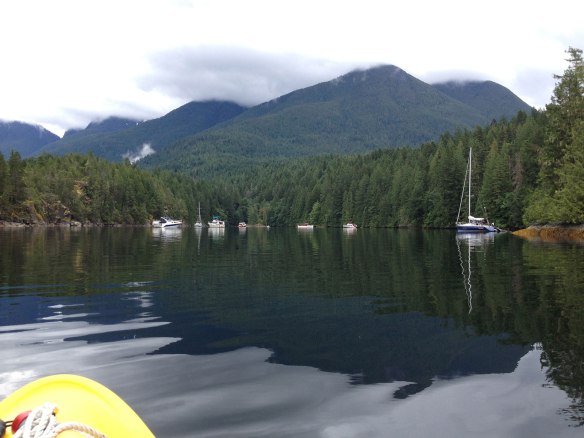 I paddled the kayak over to check out Melanie Cove, a cozy inner harbor in Prideaux Haven. There were less than a dozen boats anchored there.

Before the heavy rain started, we launched the kayak and I paddled over to check out the boats in Melanie Cove, a cozy inner harbor that offers shallower anchoring and the best views of the mountains. We used to anchor in there with Carina, but as it became more popular, we often found it crowded. So we prefer to anchor in the larger harbor to have more room around us. Of course, there aren’t many boats here now, so perhaps that doesn’t matter!

It was fun to paddle around Melanie Cove. It’s pretty in there, and the rocks and trees haven’t changed much in the 30+ years since we were first there. I remember much of the shoreline since we thoroughly explored it with our dinghy in previous visits. It was fun to go back to a familiar place. The fresh water stream is still in the same place, flowing over rocks into the cove. That has been, and still is, a good source of fresh water if the tanks are low. 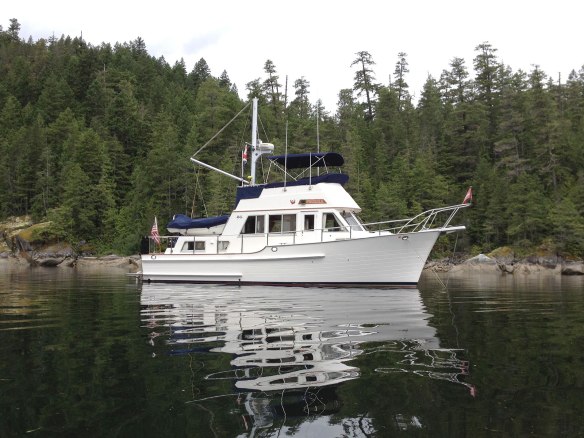 Phoenix at anchor in Prideaux Haven, Desolation Sound, B. C.

Even though we were getting drenched with rain, it wasn’t particularly cold, with temps in the high 50s and low 60s. And we did have some dry breaks from time to time. We were happy to stay in the calm, secure anchorage and relax, read, and do chores around the boat.

Many rain squalls blew through while we were anchored in Prideaux Haven. We watched them as they blew by in the nearby mountains. 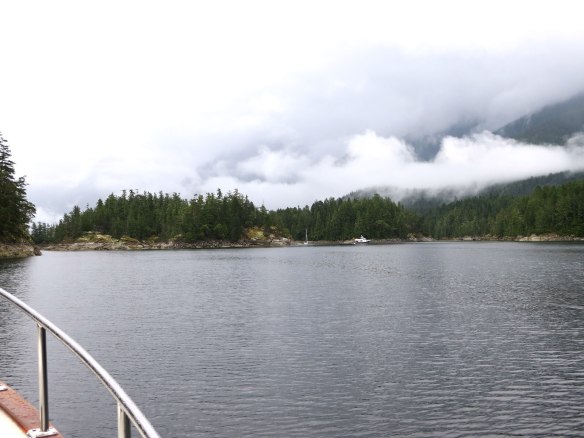 The clouds were even lower the second day we were at Prideaux Haven. 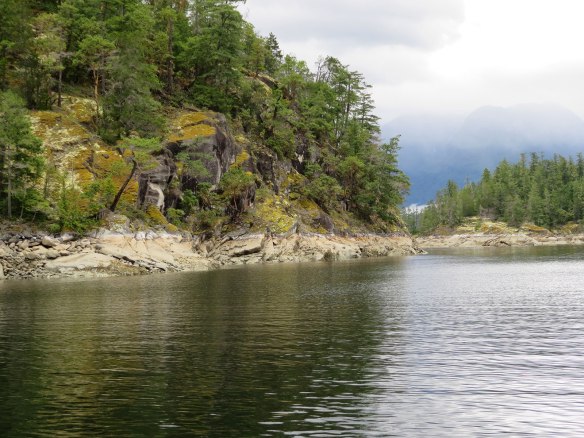 From our boat, this is a view of the nearby shoreline. The entrance to Prideaux Haven is through the cut between the two islands, shown near the right of this photo. You can see a spot of low clouds in the distance above the cut.

We’ve managed to keep our electrical system working by running the generator several times a day. It’s still a worry, as our batteries aren’t charging efficiently, probably because of the two bad batteries. We will look for a marina with power when we leave here. 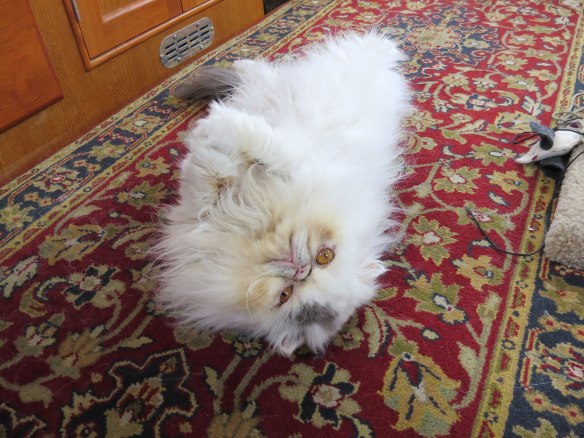 Mickey enjoyed some quiet time rolling around on the floor of the main cabin, as we sat in the anchorage waiting for better weather.