While we’ve been waiting for the new glass for our window to arrive, we’ve enjoyed some nice weather and interesting activities around the marina. These sailboats were participating in a recent Anacortes Yacht Club buoy race on Fidalgo Bay, with Mt. Baker in the distance. They had a perfect evening for a race…sunny, warm, and a nice breeze.

We had hoped that our broken window would have been fixed by now. The glass was supposed to be cut, tempered, and shipped by last Thursday. But projects on boats always seem to have “issues,” and this was no exception.

The company that is providing the new glass not able to finish tempering the glass last week because their tempering machine broke down. It is now scheduled to be here by the end of this week. Looks like we’ll be on our boat for a while longer. We have decided that we will stay here until the work is finished. Before we return to Bend, we want to be sure that everything fits, that the sliding window works as it should, and that the boat is secure.

Note: This is an update to my previous post Unplanned Trip to Anacortes. 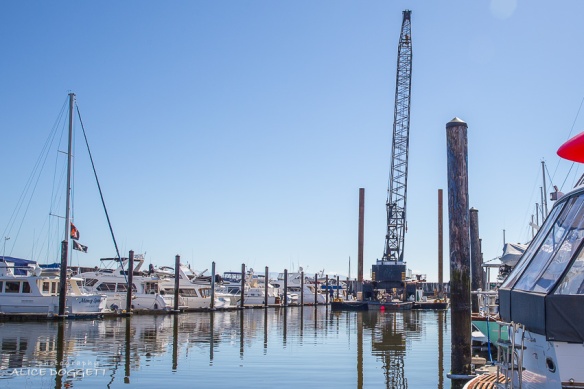 It was really a tight fit for the barge and crane that was brought into Anacortes Marina to lift the burned boat off the bottom. The equipment took up almost all the available fairway space, and the crew really had to maneuver carefully around the dock corners and moored boats.

Things around Anacortes Marina have quieted down considerably after all the activity related to the boat fire last Monday. After the burned boat was lifted off the bottom on Tuesday, it was again tied up in its slip. All the windows were blown out and the hull and cabin were blackened from the fire, but the hull was still intact so the boat could float.

A closer view of the barge and crane. 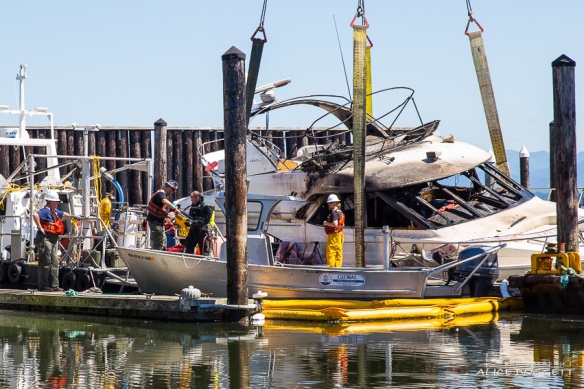 Just before we were told to leave the area in case anything went wrong with the final lift of the boat, we watched a diver prepare to dive under the boat. We assume he was doing adjustments to the straps or some other corrections before the crane lifted the boat further.

We went for a walk on Wednesday morning, and when we got back, the boat was gone and the dock and finger piers around the slip looked like nothing had happened! What an amazing cleanup job by Global Diving & Salvage!

We have heard that the boat was towed to a nearby facility to be examined by fire inspectors.

Note: This is an update to my previous post Boat Fire At Anacortes Marina. 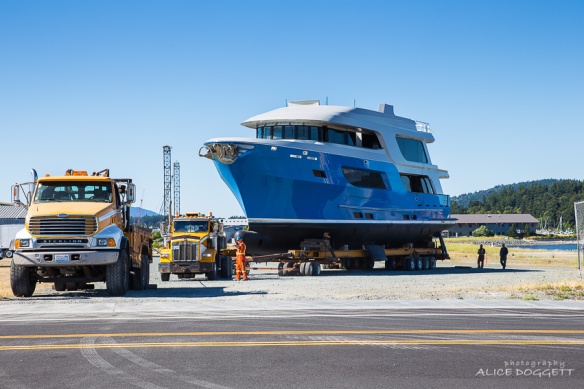 On Tuesday afternoon, we watched the Northern Marine yacht as it was being moved closer to the road. We thought they were going to continue, but the boat was stopped at the gate for the evening, and the moving resumed on Wednesday.

Another Anacortes boating story continues to unfold. In May, a 90-foot Northern Marine yacht capsized when it was launched. This yacht was built by New World Yacht Builders at its Northern Marine facility in Anacortes. After the boat was righted, it was towed to property just north of Anacortes Marina and was put up on blocks. It has been sitting there ever since.

However, last Tuesday while we were watching the salvage company lift the burned boat, we noticed that there was activity around the Northern Marine yacht. The hard top cover of the fly bridge was removed in the afternoon, and it appeared that the boat was being prepared to be moved. Toward the end of the day, we watched as the boat was slowly moved toward the street, but it was stopped at the gate. It appeared that problems with either the towing truck or the cradle caused the moving process to stop for the day.

As we started toward the Tommy Thompson Trail for our walk Wednesday morning, we noticed the Northern Marine boat was continuing its journey and was being moved south on T Avenue. It was on a cradle being towed by trucks, and was slowly moving along surface streets. The boat ended up at the Northern Marine facility, and it appears that the reason the fly bridge was removed was to lower the height enough so the boat would fit into the Northern Marine building.

Two trucks were used to guide the boat—one in front that pulled, and one behind to act as a brake. Here they slowed to navigate a left hand turn. 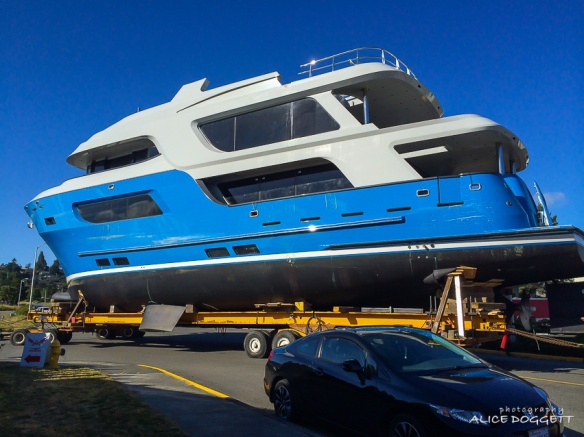 This is the port side of the boat that hit the bottom when the boat capsized at launch. Many scratches are visible along the side of the yacht. 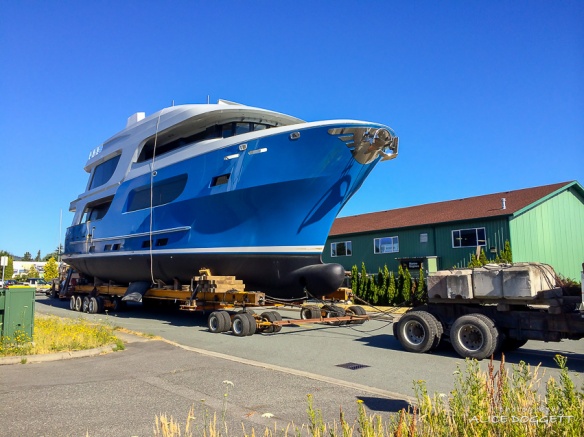 The yacht made quite an impressive sight as it slowly moved along the street. 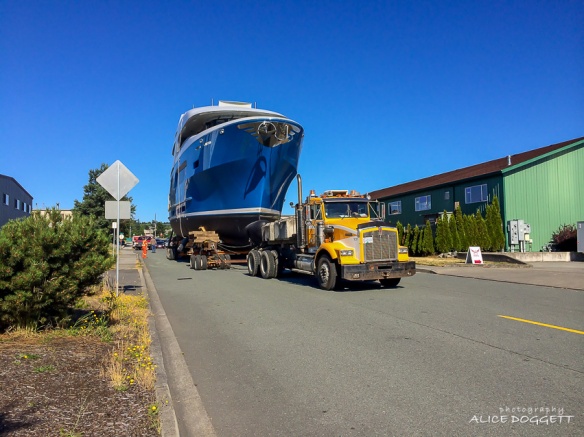 This is a wider angle to show how much of the road was being used by the yacht and towing equipment.

As we headed back from our walk, the boat had made it the rest of the way along the surface streets and was stopped in front of the entrance to the Northern Marine building. It appears that it would be moved into the building, possibly where further investigation of the capsizing can be conducted.

NBC News published this article that summarizes the incident. Another article from GoAnacortes provides more background information, including an update that indicates the investigation of the capsizing was recently taken over by the National Transportation Safety Board (NTSB).

In August 2012, I wrote a previous post in this blog about another Northern Marine yacht.