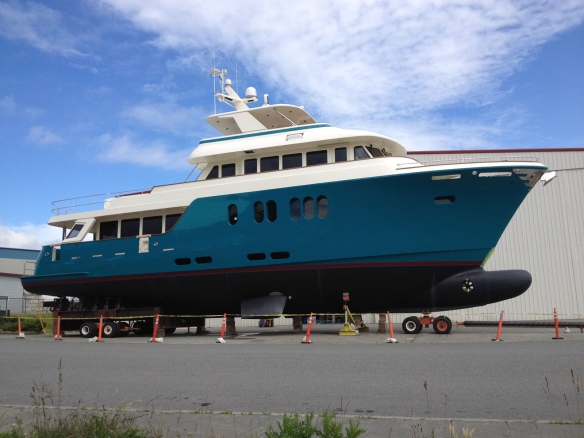 As we walked along the Tommy Thompson Trail in June, we saw this gorgeous new Northern Marine yacht being finished outside Northern Marine’s Anacortes facility.

Over the past 10-15 years, Northern Marine in Anacortes has built several long-range luxury cruising yachts, starting with their first boat, the 64-foot Spirit of Zopilote, which they built for Bruce Kessler. I had the privilege of meeting Bruce and talking with the Northern Marine founders in 1995 when I was working to help launch PassageMaker Magazine.

Over the years, when we’re in Anacortes, we’ve been accustomed to seeing multiple boats in the Northern Marine yard in various stages of completion. But it’s been slow going for luxury boat builders in recent years, and we haven’t seen many new boats in Northern Marine’s yard in the past couple of years. However, this summer it was good to see a new Northern Marine yacht being completed outside their facility alongside the Tommy Thompson Trail.

A crane lifted the hardtop and antenna array to position it as they attached it to the yacht. 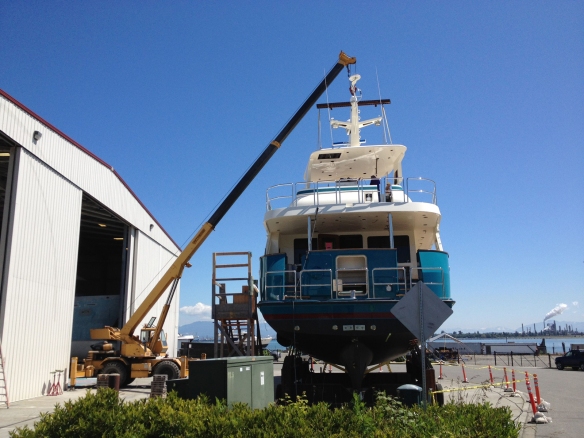 A stern view of the yacht, showing the crane lifting the hardtop and antenna array.

The Tommy Thompson Trail stretches from downtown Anacortes to the March Point refineries. It is a fairly level, paved trail along the waterfront of Fidalgo Bay, and is perfect for walking, running, bicycling, dog walking, or just as a place to enjoy the waterfront. The trail runs by Anacortes Marina, and we enjoy using it for walking and bicycling when we’re staying on our boat in Anacortes. From our marina, it’s about a 5-mile round trip to the southern end of the trail where the train trestle connects to March Point and back.

Since the trail goes right by Northern Marine’s building, we have a chance to see any yachts they bring outside for finishing. In late June, we spotted what appears to be one of their newest yachts being completed. It was interesting to watch as they attached a hardtop and antenna array. Shortly thereafter, the yacht was launched, and when we got back from our July cruise, we noticed that the boat was moored at Cap Sante Boat Haven for additional finishing. 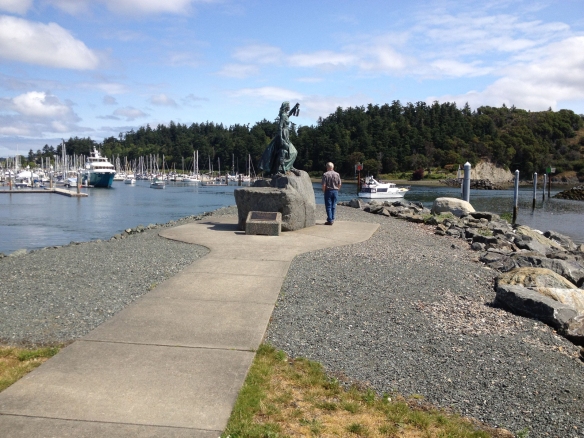 In July, we noticed the Northern Marine yacht tied up to an end pier at Cap Sante Boat Haven. The yacht towers over other boats and is visible just to the left of the statue.