As soon as the old CD player was removed, Rosie had to jump into the empty space. 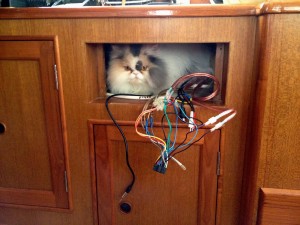 Rosie stayed in the empty space until Jim was ready to insert the new CD player.

When we outfitted Phoenix in 2002, our source for music entertainment was CDs. Don’t think there were any iPods around then. So, we installed a Sony CD player and a 10-disc CD changer, and happily played music from CDs through our stereo speakers.

Well…..since we now have iPods, iTouches, iPhones, and iPads with lots of music on them, it’s about time to upgrade our boat’s music system! We bought a new CD player, which not only will play CDs, but also will play music from our iPods that will connect via USB or audio cable. In addition, the player is Sirius/XM ready, so it easily connects with our satellite radio service.

We bought a Sony FM/AM Compact Disc player, model CDX-GT56UI CD Receiver with USB input. This unit fits in the same cabinet as our previous Sony. Jim disconnected the old player this morning and when he put in the new one, he discovered that the wiring was the same. What an easy installation! The only delay was getting Rosie out of the space…since she jumped into the open cabinet as soon as the old CD player was removed! Cats just love small spaces.