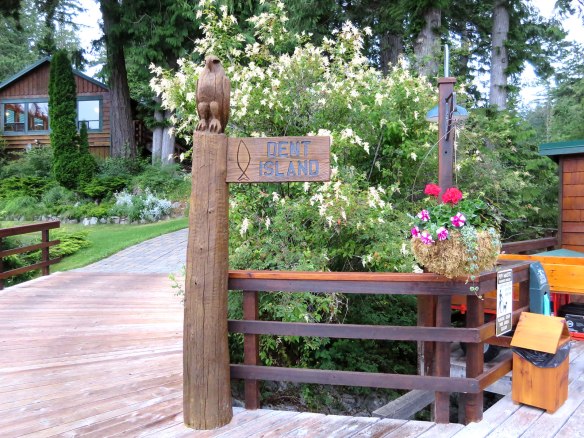 Hooray! We made it to Dent Island Lodge to celebrate our 40th wedding anniversary. A nicely carved sign identifying the lodge is posted at the top of the ramp up from the docks.

We arrived at Dent Island Lodge around noon, and it was still sunny. Clouds were approaching on the horizon, and filled in later in the day. How nice that we had a gorgeous day for our arrival and for the cruise from Squirrel Cove! After we got Phoenix tied up and things put away, we spent some time exploring the lodge and walking on the paths of the surrounding grounds. Some of the rhododendrons and azaleas were blooming, adding a nice touch of color. It’s such a pleasant place to be.

Phoenix was tied up at the end of A dock, and the other boat that was there that day was tied up opposite us. When this photo was taken, the current running out of Canoe Pass was close to maximum for the day, and you can see the turbulence and a few logs that came through with the current and ended up in front of our boat. Jim tied them to the dock so that they wouldn’t hit our hull. The currents in Canoe Pass are swift and spectacular to watch. Mountains on mainland B.C. and Big Bay is in the background. On a sunny day, this view is spectacular…and it’s even nice on this cloudy day.

Dent Island Lodge viewed from the marina dock when we arrived. 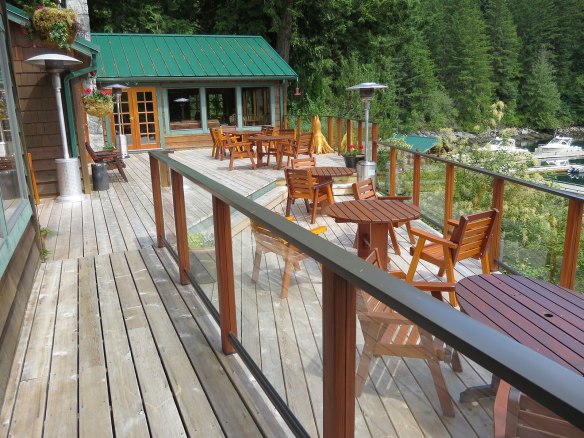 Since there weren’t many guests at the lodge, the inviting front deck was vacant. It overlooks the marina and the spectacular views to the south.

The den at Dent Island Lodge is still a pretty comfortable place to hang out. 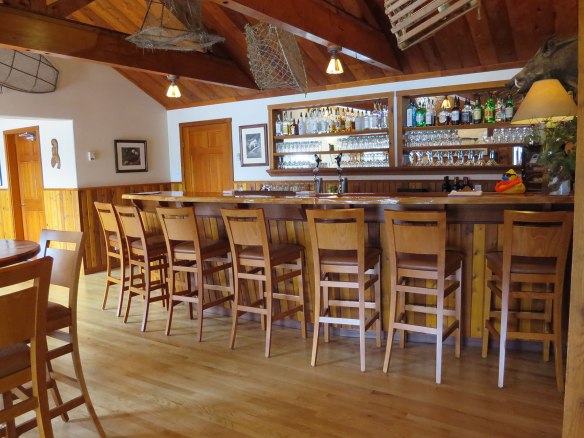 The bar at Dent Island Lodge has comfortable stools. On the left of the photo, you can see a part of one of the round café tables that are opposite the bar. This is the place for tasty hors d’oeuvres!

This year there is a bald eagle nest near the lodge with two eaglets that are a few weeks old. They have named the adult eagles Earl and Pearl, although it’s hard to tell which is mom and which is dad! The eaglets are too young to leave the nest. It was too far to see the nest with naked eyes, but we could spot the nest with our binoculars.

The lodge has built a platform on the dock that the staff uses to put fresh fish out for the eagles, and the eagles fly in to get the fish. They put fish out once a day or so, when they have fresh fish scraps. It’s very exciting to watch! Right as we arrived, they were in the process of putting today’s fish out for the eagles. I grabbed my camera and walked quickly to be near the platform where they put the fish. It was fun to watch and even more fun to have the opportunity to take close-up photos of eagles in flight.

One of the bald eagles perched on a branch in a nearby tree as he took a look at the fish that the lodge staff put out. Minutes later he swooped down and grabbed the chunk of salmon. So much fun to watch eagles up close!

I was lucky to get a good photo of the bald eagle flying away with the salmon chunk in his talons. Nice!

We watched the current build in Canoe Pass as it approached maximum ebb. It’s amazing to watch, and certainly makes you a believer in the importance of navigating at slack tide! At slack tide, this pass is calm and the water is flat. We made arrangements for dinner, and then went back to the boat. Dent Island Lodge has lots of fresh water, so this was a good time to wash off the dried salt water from our dousing when we crossed Georgia Strait a couple days ago. It was also a good chance to get our email and work on this blog, since Dent Island Lodge has improved their WiFi system and we had a pretty good signal. 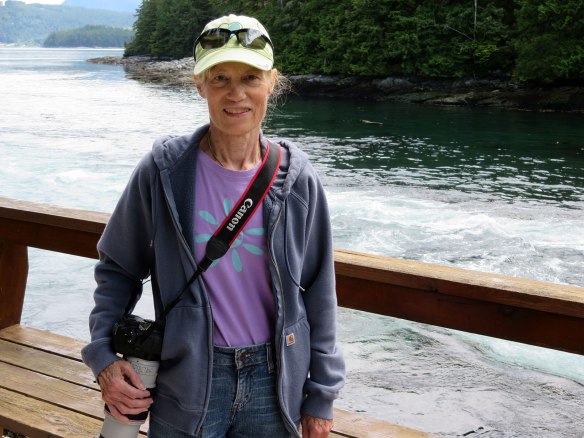 Alice on one of the decks at Dent Island Lodge, with her trusty camera. I had the large zoom lens on the camera for taking pictures of the bald eagles. The turbulent water in the background is Canoe Pass, as the ebb current is starting to build. 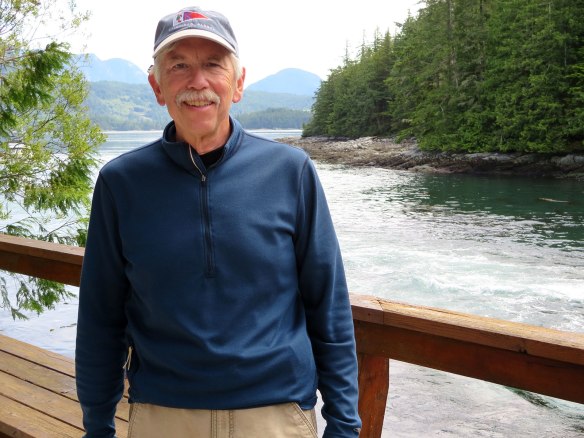 Jim on one of the decks at Dent Island Lodge. Canoe Pass is flowing by in the background. 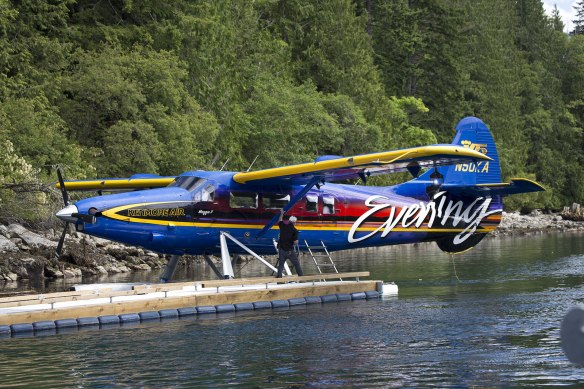 Many guests come to Dent Island Lodge via float plane to meet friends on boats, or to stay in one of the lodge’s cabins. Dent Island Lodge offers fishing guides and jet boat tours. The fishing was reported to be good this year, but we didn’t fish on this visit. This plane from Kenmore Air in Seattle’s Lake Union flew in and brought some guests.