After all the charging problems we had on our June cruise, we decided to replace all our house batteries. Here are the six new Dyno batteries sitting in the main cabin of Phoenix, ready to be lowered to the engine room.

As readers of this blog know, we had continual problems with charging our batteries on our June cruise due to a few worn-out batteries in our house bank. It goes without saying that we should have replaced the 5-year-old batteries before we left Anacortes, but we thought we’d be able to get by a little longer before we shelled out our cash. Batteries are one of the major expenses on a powerboat. At any rate, Jim recently made a trip to Anacortes to buy new batteries and replace the bad ones.

We had thought about replacing only the three batteries that tested bad, but additional research led us to conclude that we would be better off replacing all six of the house batteries. Even though three of the batteries tested okay, they were 5 years old too!

Jim ordered six new Dyno GC2 6-volt deep discharge batteries from Fisheries Supply in Seattle and asked to have them placed in will-call so that he could pick them up on his way from Bend to Anacortes.

On his way to Anacortes, Jim stopped at Fisheries Supply in Seattle to pick up the six new batteries. Here they are in the back of the car. They are Dyno 6-volt deep discharge batteries.

The new batteries had to be hauled down to our boat from our car in the marina parking lot. It’s a long walk, which can be difficult when the tide is low because the ramp from the parking lot to the dock can be really steep. Jim checked the tide predictions and waited to move the batteries to our boat when the tide was high and there was a fairly level ramp.

Many thanks to friend Bob from down the dock for his help in getting the batteries from the car to the dock and onto the boat. These puppies weigh 70 pounds apiece! Also thanks to Mel at Specialty Automotive in Bend for the loan of a battery-carrying strap, which was a big help in loading the batteries in Seattle.

To prepare for the new batteries, the first step was to clean out 11 years of accumulated junk at the forward end of the engine room. And then the inverter/charger had to be temporarily removed to get it out of the way.

There was lots of accumulated junk in the forward end of the engine room that had to be cleaned out to make room for the new batteries and new battery distribution system. The tan colored “snake” in the center of the photo is one of the coolant lines for the Webasto hydronic heating system.

In order to get the six old batteries out of the engine room, Jim had to wrestle them up to the floor of the main cabin. Then he took them off the boat and stored them on the dock while he put in the new batteries. Finally, they had to be hauled back to the car for recycling. Fortunately we discovered that Les Schwab in Anacortes will recycle batteries, so he didn’t have to drive far to dispose of them.

Moving the new batteries to the engine room from the main cabin was much easier…gravity helped a lot! The 6-volt batteries are grouped into pairs so they can be wired to make 12 volts, and each pair of batteries is stored in its own box. We use Hydrocaps on our batteries. They function to re-convert battery gases into liquid that is returned to the battery, reducing the frequency that water must be added to the batteries.

This photo shows one pair of the new batteries in its storage box. The red and black caps on the tops of the batteries are the Hydrocaps.

Once the new batteries were in, Jim had to clean up the rat’s nest of wiring that was the high current distribution system.

As part of the project, the original battery charger that came with the boat had to be removed to make way for a new battery distribution system. We had left this charger in place, but it was never used because we added an inverter/charger to use for charging. We’ll keep the original charger on board for backup. 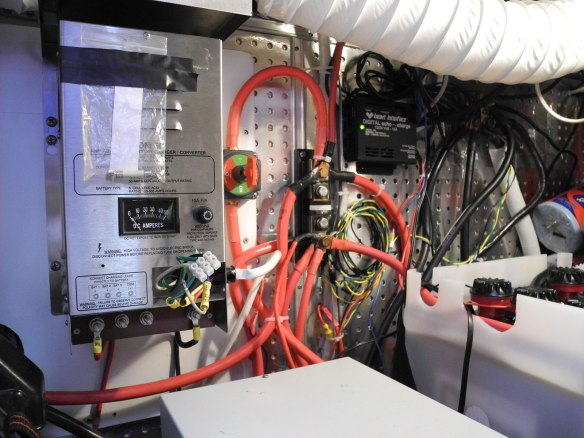 The silver box at the left side of the picture is the original battery charger that came with the boat. It was removed to make way for the new battery distribution system.

The photo below shows the new positive distribution system. It has two new bus bars. The big bus bar at the top of the frame is where the big loads (DC panel and Webasto heater) meet the big sources (engine alternator, batteries and charger). The small bus at the lower left is for accessories (heater fans and echo chargers). At the time Jim was working on this project, he ran short of big red cables and had to temporarily wire the system using two black cables that he had on hand. Next time we’re on the boat, he will replace the black cables with the proper red cables.

Finally, Jim tied down the new wiring and labeled the big cables to tidy up the engine room. So glad to be done with this project!