Looking back from the Nanaimo Harbourfront Walkway, the city of Nanaimo sparkles.

We’re on our third day at Port of Nanaimo. Jim finished cleaning out the heat exchanger, but is still in the process of adding the fluids back into the cooling system. He had to remove fluids in order to clean the heat exchanger. After three days in the engine room, he is ready for a break!

The weather continues to be unsettled, with thunderstorms today in the nearby mountains. A heavy downpour came through earlier this afternoon, soaking the boat. We had to close up all the cabin doors and ports, making it a little stuffy inside. Sometimes it’s not so bad to be tied up at the dock!

Blue skies prevailed, and when the rain stopped, we walked to the grocery and liquor stores. It’s time to get the rest of the provisions we want for our time in Canada. If all goes well with putting the cooling system back together—and if the engine checks out and runs okay—we’re hoping to move on tomorrow, weather permitting. 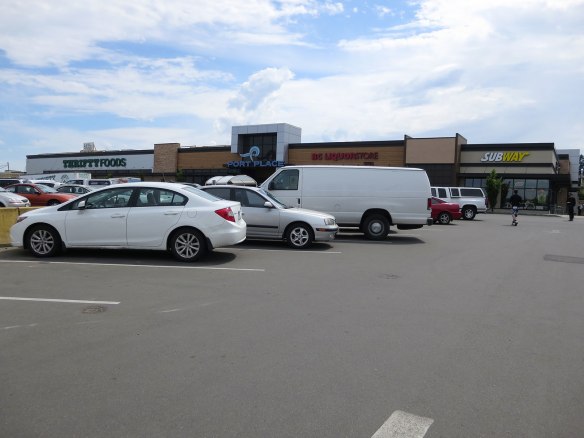 From the Port Place Mall parking lot, the Thrifty Foods is on the left, B.C. Liquor Store in the middle, and a Subway is on the right.

While Jim was working in the engine room, I did a bit of grocery shopping at the nearby Thrifty Foods. The store has been completely remodeled in the past couple of years, and parts of it are still under construction. Thrifty Foods is bigger and brighter. The isles are wider and they have more goods available. They still have great organic foods and a good selection of produce, dairy, fish and meat, and general groceries. We like shopping at Thrifty Foods.

The new building that is under construction at the mall is currently in the process of being framed.

The entire mall has been remodeled, and is now called Port Place Shopping Centre. In addition to the changes at Thrifty Foods, there is a larger liquor store and bank. Some of the small shops are no longer there. A new two-story building to the north is also under construction (now in the process of being framed), which looks like it will add even more shops.

Meanwhile, the parking lot is a mess. The construction has taken over much of the area that is usually designated for parking, making it difficult for cars to find parking places and to get around in the lot. So glad we are on foot!

The Nanaimo Harbourfront Walkway starts at the Port of Nanaimo, and passes by several small retail shops, coffee shops, and ice cream shops.

I found a nice place to walk here: the Nanaimo Harbourfront Walkway (note that Canadians spell ‘harbor’ as ‘harbour’). The walkway is a paved path that stretches from the Port of Nanaimo (which is near the downtown core of the city) and continues north. It passes through a park, and runs between condos on the shore side, and the beach and shoreline on the harbor side. There are also many marinas on the harbor side. (There is a LOT of boating activity in Nanaimo.)

The Nanaimo Harbourfront Walkway goes through this park.

I passed this cute little rabbit on my walk. He was so busy chewing on the grass that he didn’t mind me stopping to take his picture.

The scenery along the walkway is great and the path hasn’t been too busy. I imagine that it might get crowded during summer vacation season. I extended my walks by continuing along the local Island Highway (beyond the walkway) until I reached the B. C. ferry terminal, making my round trip walk about 4 miles. 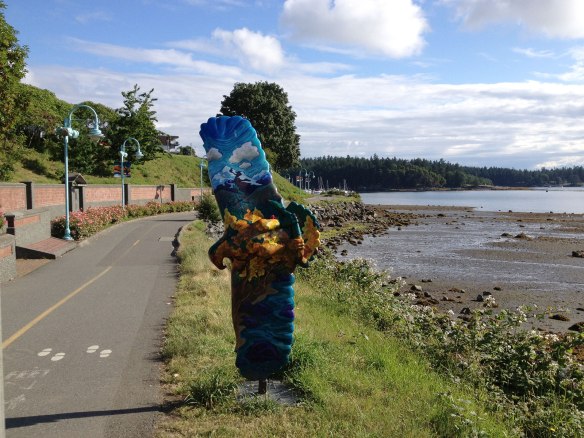 A better view of the River Flight Statue along the Nanaimo Harbourfront Walkway.