Phoenix tied up on the docks at the Port of Nanaimo.

We arrived in Nanaimo yesterday (Sunday) and are staying here today as well. We’re tied up at Port of Nanaimo, our choice of a place to tie up where Jim can do some work on our engine. We started out across Georgia Strait in the late morning yesterday, thinking we would take advantage of a brief weather window. But after a half hour or so, we noticed that our engine was running a little hot. We decided it would be better to get to a dock and check things out before we made a 15-mile crossing of a large body of water.

First, a brief announcement: The APRS location finder we mentioned in our last post is not working! Turns out, Jim has more work to do. If you clicked the link we provided to check on our position, you saw it showed us in Anacortes until yesterday. Now it shows us in Nanaimo. Jim can manually set our position to whatever he chooses, so he changed it to Nanaimo yesterday. But, the system is supposed to show where we are and provide a track of where we’ve been for the past 7 days. Hopefully, Jim will get a chance to figure it out. Meanwhile it isn’t very accurate, and if Jim gets it working, we’ll post an announcement.

We left Anacortes mid-morning on Saturday, the 15th, in favorable weather conditions: sun, warm temps, and light wind. The current was with us as we cruised out Guemes Channel, and it continued to push us across Rosario Strait and along Harney Channel as we made our way through the San Juan Islands. 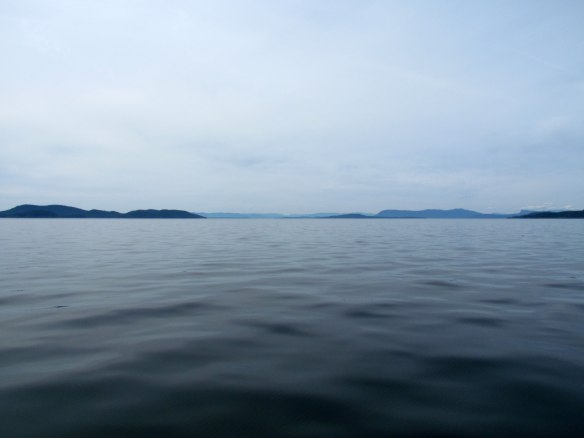 It was so calm in Boundary Pass that my camera wouldn’t focus!

When we reached the west side of Orcas Island, we saw what looked like relatively calm water across Boundary Pass toward Canada. So we decided to continue on to Canada and not stop in the San Juan Islands. We headed for Montague Harbour, on Galiano Island, in the heart of the Canadian Gulf Islands.

We passed a whalewatcher boat in Plumper Sound.

The M/V Pacific Yellowfin stands out in Plumper Sound, with Mt. Baker in the background.

At Montague, we’re able to clear Canadian Customs using our NEXUS passes. Boundary Pass WAS very calm, and the passage through Plumper Sound was good too. It was calm and warm (almost hot!) when we reached Montague, and we cleared Customs with no incident. We decided to stay at Montague for the night and had no problem finding a place to anchor.

The clouds came in later that evening, so we didn’t get the usual spectacular sunset that we often see in Montague. But it was glassy calm and a good night to barbecue the Copper River Sockeye Salmon filets we brought with us from Anacortes. We enjoyed a yummy dinner and a quiet and peaceful evening and night.

It was still calm with filtered sun on Sunday morning, and we left early (0715) to catch the Dodd Narrows slack at 1034. We had the current with us as we headed north through Trincomali Channel, and we arrived at Dodd on time for the slack, a 3-hour trip from Montague, at an average speed of 7+ knots.

As we emerged from Dodd Narrows, we spotted this bald eagle with a good size salmon in his talons. It’s good fishing in the whirlpools that form at the exit of the water from the narrows.

We encountered two very large log booms being towed by tugs as we left Dodd Narrows, so we had to work our way around them as we continued on toward Nanaimo. There were 1-2 foot swells being pushed at us from a 10 knot SE wind, but it wasn’t uncomfortable as we had a good angle on the waves. The weather forecast for Georgia Strait called for SE winds of 10-15 this morning, diminishing around noon, and then increasing to 15-20 later in the afternoon. Since it was around 1100, we decided it might be a good opportunity to cross the Strait during the forecast diminished wind. Also, since it was Sunday, Area Whiskey Golf was not active. So we headed out toward Welcome Pass.

Scroll down to read About Area Whiskey Golf.

The conditions weren’t too bad and, after a half hour or so, it looked like we could continue across. However, when we increased our speed for the crossing, we noticed the engine was running a little too hot, and we bagged the idea and turned back to Nanaimo where we could tie up to a dock and be near services.

This view of Phoenix at the dock shows the rest of the transient moorage at Port of Nanaimo.

Jim is working on checking out the engine. He cleaned the raw water strainer and put a new impeller in the raw water pump. While changing the zinc in the cooling system, he noticed that the heat exchanger (functions like the radiator in a car) has a fair amount of crud in it, like salt buildup, which is probably restricting the flow of cooling water. So, now he’s working on flushing it out to see if he can get it clean enough for us to go on. It’s looking like we may be here a little longer than we expected!

The nightly moorage rates at Port of Nanaimo are a little higher this year: $1.25 a foot, plus $4 for power. Plus it’s a very busy waterfront and is often rather noisy. We’ll stay here only as long as we need to. But, it’s a good place to stop, as good marine and grocery stores are in easy walking distance. There are some foods we can’t bring into Canada, so once we clear Customs, we stop to get the things we can’t bring. This includes some fresh fruits and vegetables plus any beer, wine or liquor we want to have along. Nanaimo is a great place to stock up.

Area Whiskey Golf (AWG) is a torpedo test range that is set up in the middle of Georgia Strait. The Canadian Navy uses this area for torpedo practice. When AWG is “active,” boats are not allowed to pass through the testing area (For good reasons! We don’t want to get hit by a torpedo!). Each day, the marine weather broadcast includes an announcement to advise whether the area is “active” or “not active.” The test range is usually inactive on Sundays, and some other days when the Navy is not using it.

The AWG test range is smack-dab in the middle of the shortest course from Nanaimo to the Sunshine Coast on the other side of Georgia Strait, and going around AWG makes the crossing much longer. Sometimes it also makes the passage less comfortable because setting a course to get around AWG may result in a course that is not favorable for the sea conditions. Whenever we can cross the Strait without having to dodge AWG, we are happy campers!

Rosie and Mickey were curious about the noise on the dock from people walking by.

6 thoughts on “Anacortes to Nanaimo”