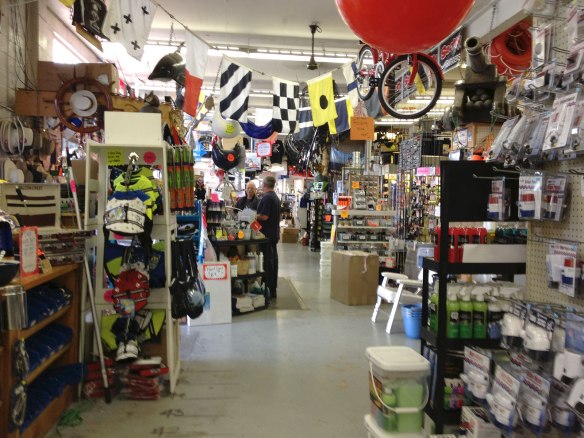 Harbour Chandler in Nanaimo has lots of serious boating and fishing gear.

It took all day, but Jim thinks he finally has enough fluid back in our cooling system so that we can safely run our engine. After he flushed the heat exchanger and reassembled the cooling system, he wasn’t able to get all the fluids back into the system. He thinks this is because he ended up with an air bubble or bubbles in the system when he put things back together.

He had to get the engine hot enough to trigger the thermostat so that fluids would run through the entire cooling system. A consulting call to a friendly Cummins technician at Independent Diesel here in Nanaimo confirmed he was on the right track. We ran the engine for a half hour at 1800+ RPMs, and then checked the level of the coolant. It had gone down enough that he was able to add more fluid. We ended up doing that three times today, and each time he was able to get just a little more fluid in. We think there is room for more (he has about 3 pints left over), but it really won’t level out until we run the engine under a load for a while.

Running the engine at high RPMs and opening the engine hatch to check on it is VERY noisy. So, while Jim was doing that, I took the kitties to the aft cabin and stayed with them, closing the cabin door to keep the noise down. They weren’t very happy about being closed up in the cabin, but we think the noise from the engine would have been much harder on them. It’s always a challenge to do heavy-duty work on the boat when we’re living aboard…especially when we have our furry family members with us!

The entrance to Harbour Chandlery looks rather unassuming, but all the goodies are inside!

Jim needed some tools to continue his work on the cooling system today, so we walked up to Harbour Chandler, an excellent source for all kinds of boating and marine gear. In addition to the normal kinds of things that a marine store carries, Harbour Chandler has lots of serious fishing and boating gear for commercial fishing boats and long-distance cruising boats. We love looking through their store, and it’s only about a half-mile walk from the marina.

We also walked through old town Nanaimo, about a block from the marina. This area is predominately commercial. It has a post office, banks, hardware stores, several small shops, and many small cafés and coffee shops. We walked through Hill’s Native Art Gallery, one of our favorite galleries for native art, and stopped at Nanaimo Maps and Charts.

We’ve been stopping at Nanaimo Maps and Charts since 1980, when we stopped there to get additional Canadian charts. In addition to a very complete selection of Canadian charts, the store has the largest supply we’ve seen of books covering the B. C. coast and local history, whether cruising guides or stories of the area. We found a book called “Out Of The Rain,” by Paul Jones, a story about coastal B. C. and Ocean Falls in the 1940s. We’ve been interested in the history of Ocean Falls since we stopped there on our way to Alaska in 2003, and were captivated by the beauty of the area and the friendliness of the people who are still living there.

I fixed Chicken Feta Pasta, one of our favorites, for dinner tonight. The recipe makes six servings, so we can look forward to leftovers. We like having leftovers. It makes cooking and cleaning up so much easier!

We think we’ll be able to travel tomorrow, assuming all checks out with the engine. We’ll decide in the morning about our destination. There are wind warnings posted for Georgia Strait for tomorrow and we won’t want to head across if the wind actually kicks up. The weather is still unsettled, and rain and wind are forecast for Nanaimo tonight and tomorrow. We’ll look at the situation in the morning and go from there. We’ve enjoyed the amenities of Nanaimo (including the Port of Nanaimo’s Wi-Fi service, since BBX is no longer here), but it’s certainly time to move on!

3 thoughts on “Moving On”