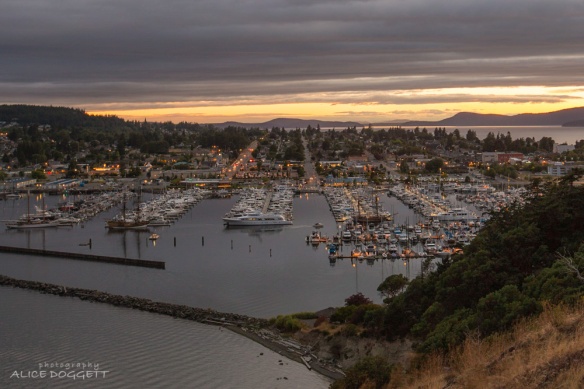 The lights of Cap Sante Marina and the City of Anacortes from the top of Cap Sante. The San Juan Islands are in the background behind Guemes Channel.

It’s been quite a while since I added a post to this blog. Primarily because our boating season last year was a bit of a bust. After taking care of the broken window in July (see earlier post), we had hoped to return to our boat and do some cruising. But that didn’t happen. So, even though we spent several weeks on the boat last summer, we never left our slip in Anacortes Marina! All due to the usual reason, “life got in the way.”

We hope to return to our boat and enjoy more sea adventures this year, and I hope to publish more cruising-related posts!

Since we didn’t go cruising, I don’t have cruising photos to share. But I did take photos while we were staying on our boat! Here are a few of my favorite photos that were taken in and around Anacortes from July through October of 2014: 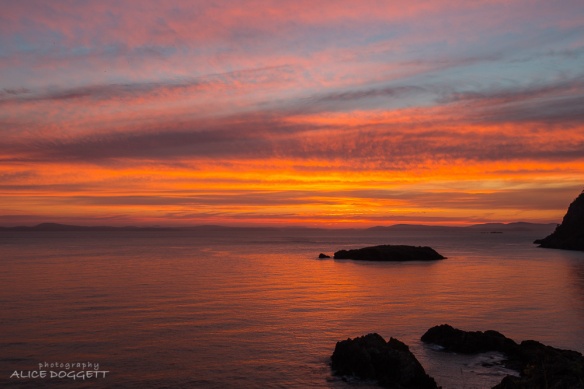 SUNSET AT ROSARIO HEAD: A gorgeous sunset from Rosario Head in Deception Pass State Park. In the background, Rosario Strait and the San Juan Islands. 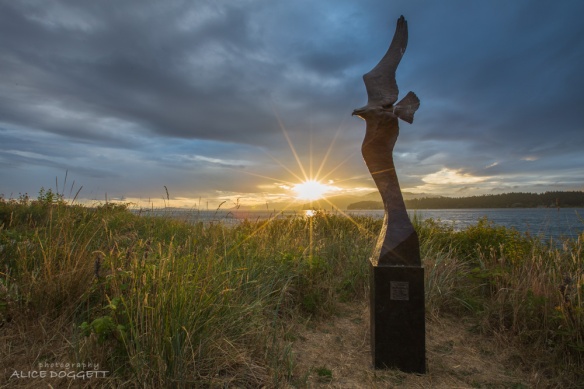 A SUNSET FOR WORLD PEACE: In Anacortes, near the Guemes Ferry landing, the setting sun highlights the sculpture “Windsong,” with Guemes Channel and Guemes Island in the background. The sculpture by Leo E. Osborne is dedicated to world peace. 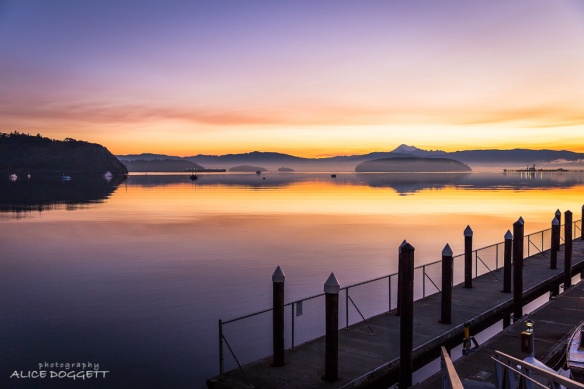 FIDALGO BAY AT SUNRISE: Fidalgo Bay from Anacortes Marina with Mt. Baker and the Cascade Mountains in the distance. Water smooth as glass…a most peaceful Sunday morning. 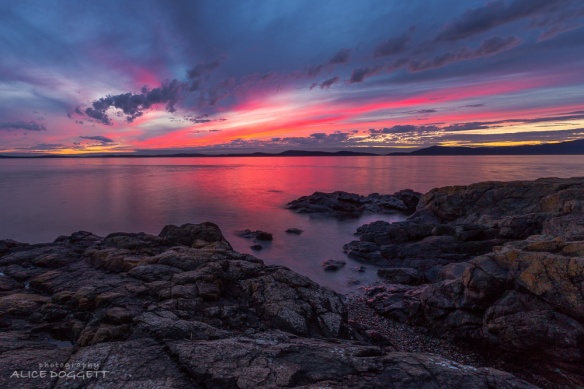 RED SKY AT NIGHT, SAILOR’S DELIGHT: Streaks of red and yellow in the western sky created a spectacular sunset and a bright red glow on the water. This view is from Washington Park looking across Rosario Strait toward the San Juan Islands. 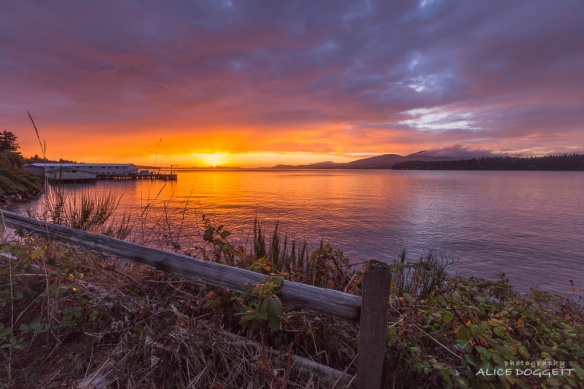 GUEMES CHANNEL AT SUNSET: The clouds parted on the horizon just before sunset, after a day of Autumn rain and wind. The break in the clouds made for a colorful sunset, seen here looking out Guemes Channel toward the San Juan Islands. Guemes and Cypress Islands are in the background. 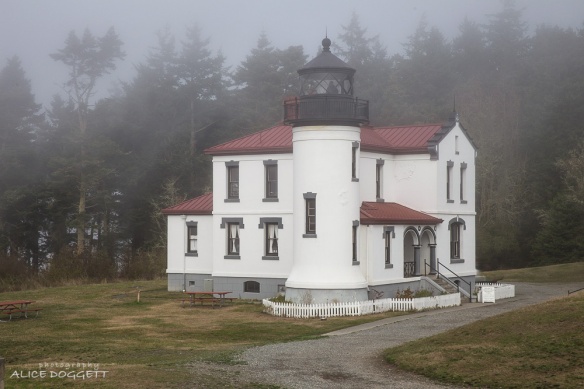 ADMIRALTY HEAD LIGHTHOUSE: Sometimes thick fog rolls in to Anacortes and hangs around throughout the day. After a very foggy morning, when the sky at our marina started to clear, we decided to drive to Whidbey Island and visit Fort Casey State Park. Unfortunately, the fog was still thick at the park and we never saw the sun the whole time we were there…in this photo, you can see the fog in the trees behind the lighthouse. Admiralty Head Lighthouse is located on a tall bluff over the entrance to Admiralty Inlet from Juan de Fuca Strait. The lighthouse was built in 1861 and rebuilt in 1903, and served as a guiding light for the tall sailing ships that carried goods into Puget Sound. It was extinguished in 1922 but has been preserved for events and viewing. 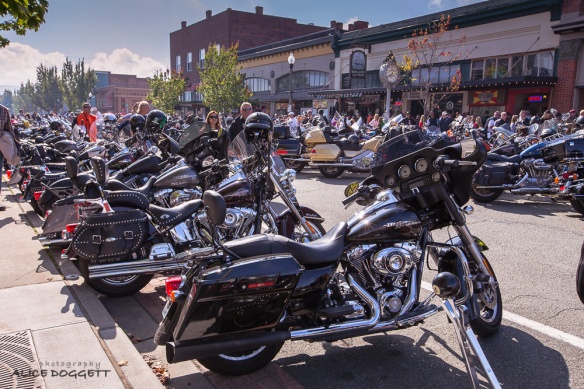 OYSTER RUN: Thousands of motorcycles roared into town for the 33rd annual Oyster Run in September. It’s the largest motorcycle run in the Pacific Northwest, drawing thousands of cycles of all makes and models. The streets of Anacortes were filled all day with cycles and riders celebrating their love of motorcycling. Motorcycles come and go all day and the sounds in town can be deafening at times. 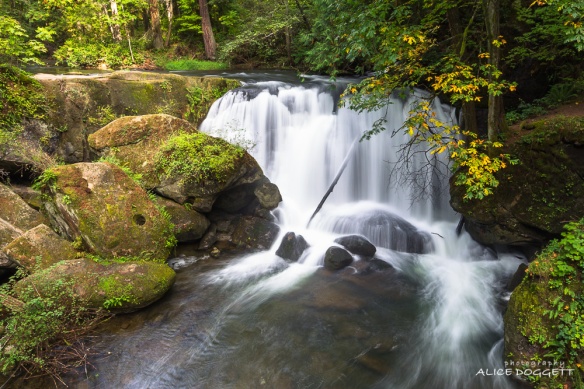 WHATCOM FALLS: We headed north to Bellingham for a wonderful hike through a beautiful park—Whatcom Falls Park. The park offers 5.5 miles of hiking trails along Whatcom Creek, which flows throughout the park, and Whatcom Falls has to be the highlight. A bit of fall color is just starting to show on some of the tree leaves. 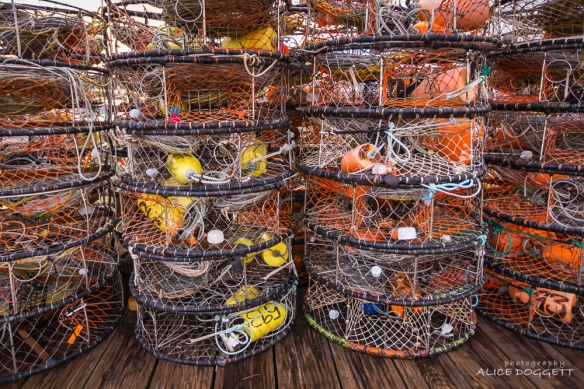 IT’S CRAB SEASON: Crab season opened in early October for Marine Area 7 (San Juan Islands), and crab pots were stacked high on the docks at Cap Sante Marina, and on the beds of many pick-up trucks in nearby parking lots, as fishermen got their gear ready. 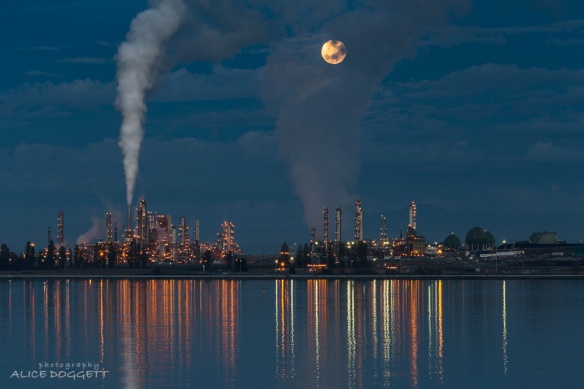 MOON OVER REFINERY: A spectacular full moon rose over the Anacortes Refinery in early October. A layer of fog at the horizon kept the moon hidden until it was high in the sky, and clouds combined with steam plumes from the refinery made it challenging to get a clear shot of the moon. 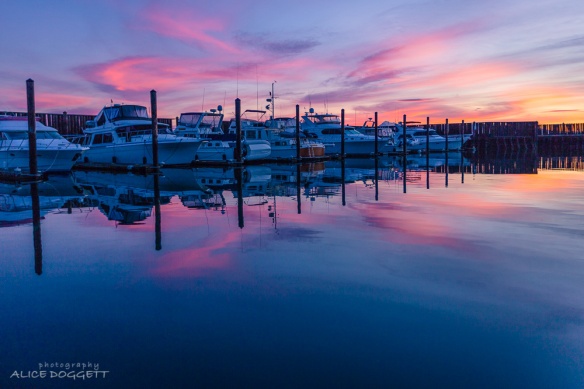 BLUE HOUR AT THE MARINA: Dawn at Anacortes Marina. At dawn before the sun rises, blues are intense, and today the light from the rising sun turned the clouds bright pink. What a spectacular beginning of the day! 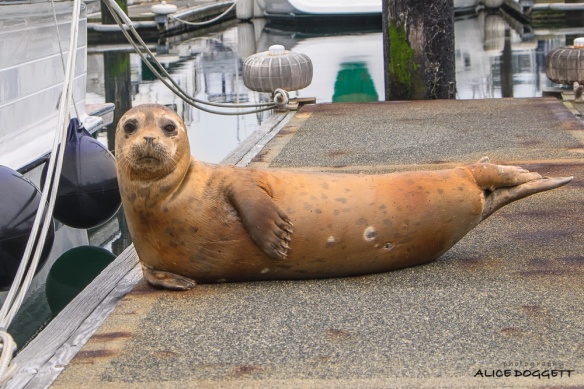 HARBOR SEAL: It’s pretty quiet at the marina in October, and we see more wildlife in and around the docks. This young harbor seal spent some time hanging out on the finger pier next to our boat, entertaining us and our kitties. He/she stopped squirming around long enough to pose for my camera.

BEACH SUNSET ON GUEMES CHANNEL: As the tide goes out, there is more beach to explore along the Anacortes side of Guemes Channel. The sun peeked out from the clouds on this evening, just long enough for a colorful close to the day.