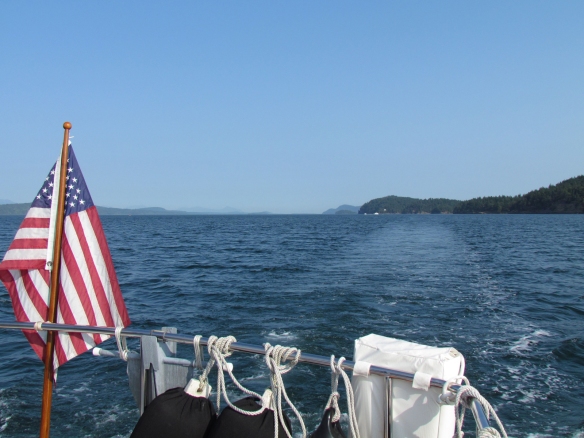 We left Montague Harbour and headed south in Trincomali Channel. This is the view looking north in the channel.

Okay, okay. I’m late in finishing the posts from our cruise a couple of weeks ago. Two more posts yet to do, and I’ll do one today and will get to the last one as soon as possible. We’ve just been too busy with eye doctor appointments, spotty WiFi service, and other distractions…and I haven’t been able to get to the blog as much as I hoped.

So, back to our cruise… We left Montague on Saturday, July 7th. We planned to head to Ganges and take in the Saltspring Saturday Market (http://www.saltspringmarket.com) before returning to the States. The Saturday Market in Ganges is quite an event, and we look forward to opportunities to be in Ganges on Saturdays during the summer so we can go to the market as well as visit other favorite shopping venues in Ganges.

It was calm in the anchorage at Montague Harbour in the morning, but afternoon wind predictions encouraged us to skip the Saturday Market and head for the San Juans instead. We have to be back for Jim’s July 10th eye exam in Seattle, so didn’t want to be caught by weather and end up too far away from Anacortes. We’ll be sure to plan our cruising in September so that we’ll be able to visit the Saltspring Saturday Market!

We decided to bypass all the currents and whirlpools where Haro Strait meets Boundary Pass, so rather than returning through Swanson Channel, we headed south in Trincomali Channel to Navy Channel, then through Plumper Sound and across Boundary Pass — which is a direct route into the San Juans through Spring Passage, then Deer Harbor and Pole Pass. This route also bypasses all the whirlpools around Speiden Island. 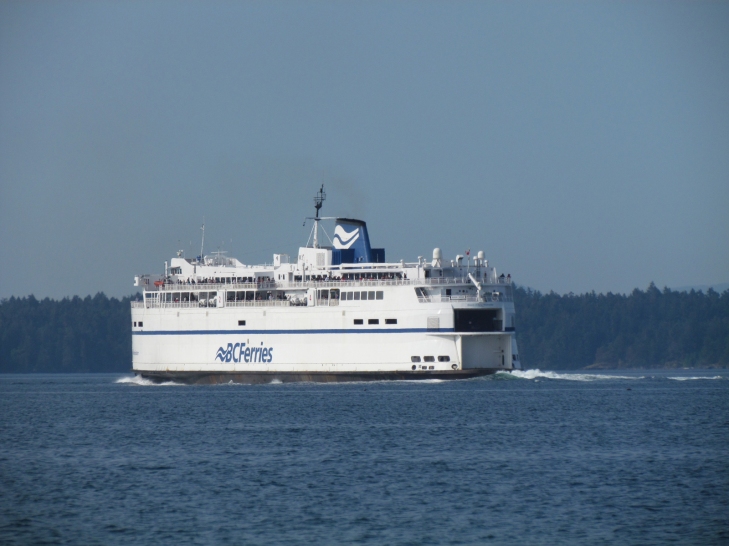 This morning, we encountered only one B.C. ferry coming through Active Pass.

We decided to time our passage to hit Boundary Pass at slack tide, to minimize the whirlpools and tide races. We had the current with us almost all the way, as we left Montague at 0800 to catch the 0900 slack in Boundary Pass. Everything turned to ebb (including Pole Pass), and we got a great lift from the current. 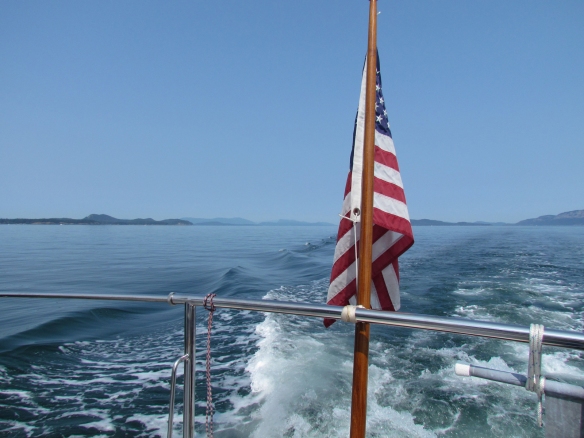 It was calm all the way across Boundary Pass. This view is looking back toward the Gulf Islands.

Once we got into the bay outside Deer Harbor, we were able to power down and idle to call U. S. Customs for our clearance to return to the U.S. With our Nexus passes, we were allowed to clear over the cell phone. Since it was Saturday, we encountered lots of pleasure boats in Harney Channel.

We plotted our course from Boundary Pass to enter the San Juan Islands through Spring Passage. This view is looking ahead toward the San Juans, with Orcas Island on the left.

As we passed West Sound, we decided to check the Double Island anchorage in West Sound, and found only two other boats there. So, we decided to stop there for the night, rather than continuing on to Blind Bay. Another powerboat and 3 more sailboats came in later in the afternoon…more boats than we’ve ever seen in this anchorage.

It was relatively calm and sunny for the afternoon and evening. We were glad to have U.S. Internet service again so we could get caught up on bank stuff and emails. We fixed BLTs on rye bread for dinner. We don’t usually have bacon onboard, but made an exception and brought some along this time, with the intention of fixing a nice breakfast somewhere…and since we hadn’t fixed such a meal, this was a good way to use the bacon!